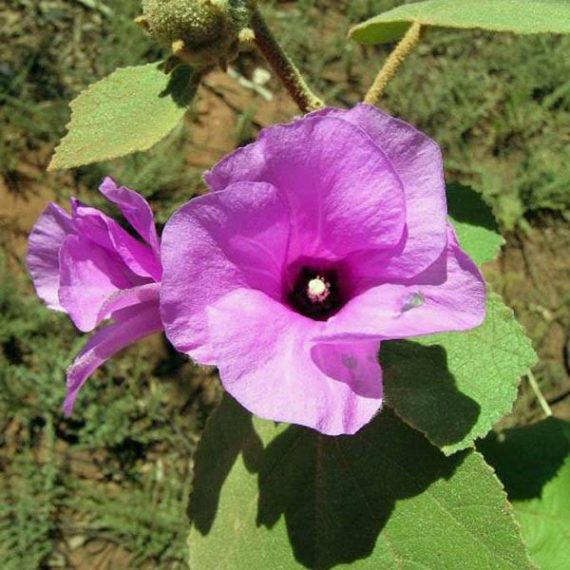 Native to the southern half of Australia, except Tasmania, this plant’s natural habitat includes New South Wales, Victoria, South Australia and West Australia. It is sparsely represented in the first three states but has quite a presence in an area between Kalgoorlie and Esperance extending through to Geraldton. Its preference is for red, sandy or loamy soils or granitic, stony soils.

An erect, spreading shrub growing 1 to 3.5 metres (39in to 11ft) high and 1 – 2 metres wide, it has grey-green, entire or shallowly lobed, toothed leaves which are broadly ovate to circular, 15cm across and covered in stellate (radiating from the centre) hairs. The flowers  are deep pink to purple, hibiscus-like, 6cm wide with five petals and appear in summer. The fruit are spherical capsules 15mm wide.

The Bush Hibiscus can be grown as an annual or perennial. Strictly speaking, it is a perennial that dislikes temperatures much below 4 deg C, will be badly damaged by frosts and will die back to ground level. However, come warmer weather it will resprout from the base and produce those delightful purplish flowers of the previous season.

Though native to the arid areas of Australia,  it is often found in Mallee communities, on roadsides, creek levees and floodout areas.

This plant grows readily from seed.

Offered is a packet of 25 seeds complete with propagation notes.