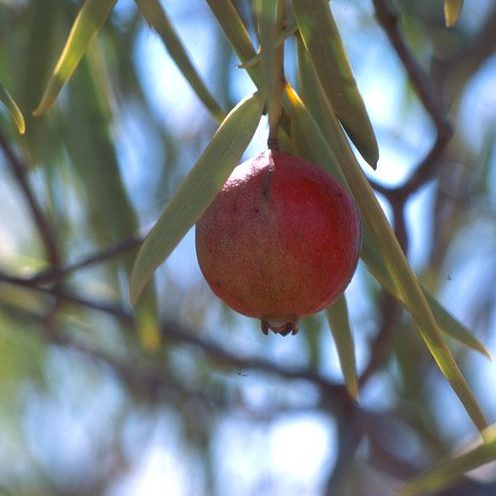 Sandalwood has been exported from Australia since the 1850’s competing with Santalum alba (Indian Sandalwood) for market share. Like other members of the Santalum Family it is hemi-parasitic, that is, it takes nutrients but not sugars from other plants by spreading underground up to 10 metres to attach itself to their roots. Sugars are obtained from their own photosynthesis and it has been seen that their fruit has qualities that are normally only seen in those of its hosts.

A tall shrub or small tree to 4 metres (13ft), its bark is rough and dark grey; the branches tend to have a weeping habit; the leaves are slender to ovate with an acute tip, opposite, shortly petiolate, leathery and pale or yellow-green; the flowers are green or white on the outer parts and reddish or brown on the inner and fragrant; the fruit is a reddish-brown drupe, with 3mm of flesh covering a 20-25mm round, brown nut. Unlike its cousin the Desert Quandong, its fruit is considered inedible.

Not considered endangered because of its widespread presence ranging across all of West Australia south of Karratha and extending into South Australia ceasing at the Stirling Ranges. The aromatic, dense wood is sought for its fragrance and used in Asian religious events.

Offered as a packet of 5 seeds with grownotes.

AUSTRALIAN BUYERS. Payment by PayPal is preferred but Direct Deposit is welcome.

Ole Lantana Seeds will not be responsible whatsoever for actions taken by the customer after receipt of the goods, this includes germination results, crop performance or loss as these are beyond the control of Ole Lantana Seeds.

International buyers are responsible for knowing their country’s importation laws.

NOTE: In order to protect our existing stock from outside contamination, we do not accept returns..

Drought & Frost Tolerant. The flowers produce a scent similar to that of buttered popcorn.